The famous groups of statues that have long been known as the ‘Saints of Solesmes’ are in the transept. Since the monastery's archives were destroyed during the French Revolution, we do not know who sculpted them. The sculptors worked under the supervision of Solesmes' priors. These masterpieces were far too expensive for the priory's financial means and were probably donated by generous benefactors, who are also unknown to us. They were saved from destruction during the French Revolution.

The entire Belle Chapelle (Chapel of Notre-Dame La Belle) in the north transept is devoted to the Blessed Virgin Mary. The entombment of the Virgin was clearly built to mirror Christ’s entombment in the south transept. The figure seated at the foot of the Virgin's sepulchre mirrors Mary Magdalene. Nevertheless, both the style and spirit of the Belle Chapelle are quite different to Our Lord’s tomb: it is full of movement and profusely decorated. The Belle Chapelle is not from the same era: work probably began on it c. 1530 and continued until at least 1553, which is the date engraved on the south colonnade. This complex group of statues extends over two levels and on the three sides of the transept.

The iconography starts with a scene from the Apocalypse (12:1), on the upper register of the east group. The Virgin Mary is depicted as the woman from the Book of the Apocalypse, crowned with thorns and with two eagle wings. Beneath her is a procession of six young women, symbolizing the Virgin Mary's virtues. The two virtues shining forth most brightly in Mary – humility and ‘faith moved by charity’ – are in the middle of this procession. The cardinal virtues are on either side: fortitude and prudence on the right, justice and temperance on the left. These virtues enabled Mary to conquer the beast ridden by the great harlot of Babylon, as described in the Book of the Apocalypse (17: 1-6). Two figures at either end of the upper register on the north wall appear up to the waist; they are presenting texts explaining this scene from the Apocalypse. Four other figures beneath the entablature on the north wall have the same role. According to Tradition – drawing partly on the accompanying texts – these figures are, from left to right, St Bernard, St Anselm, St Augustine and St Bonaventure.

At either end, the standing figures of St Timothy and St Dionysius the Areopagite are speaking about the Dormition of the Virgin Mary. According to St John Damascene, they were eye-witnesses of this event with the apostles. The dormition is represented in the scene known as the Ecstasy, in the lower register of the east group. According to Tradition – to which the Apocryphal Gospels and the Golden Legend bear witness – the apostles were present at the Virgin Mary’s death. This was a unique ‘death out of love’ or ecstasy. Mary is supported by Peter and John and – in what is an iconographic innovation – is receiving communion from the hands of Jesus himself, who says to her: “Receive, my beloved, what I will shortly perfect in my Father's house.”

The burial of the Virgin is depicted on the lower register of the west wall. The scene is intended to mirror Christ’s entombment in the south transept. Although the style is different, the Virgin Mary's face is marked by the same peace and serenity as Christ's. The artist wanted to show that the Virgin Mary’s death marked her entry into eternal life with God rather than being a wrench. This is what Tradition calls her dormition.

The west wall contains just one group of statues. It is on the upper register and depicts Jesus among the doctors. According to the Gospels, the twelve-year-old Jesus stayed on in Jerusalem at the end of the annual pilgrimage. Retracing their footsteps, Mary and Joseph found him in the temple talking to the doctors (Lk 2: 41-52). The artist has mischievously depicted this scene using the facial features of two of the main 16th-century Protestant reformers.

The Tomb of Our Lord in the south transept was completed c. 1496. This date, which is engraved on the right pilaster, is confirmed by the arms on the entablature, which are those of King Charles VIII, his wife Anne de Bretagne and the Dauphin, Charles-Orland.

This monument is entirely devoted to the passion and resurrection of Christ. It serves as a sort of reliquary monument for the relic of the Holy Thorn. The recess to hold this relic can be seen hanging from the arch in the monument’s lower section. In the upper section, the plain crucifix (empty since the body has just been entombed) stands on Calvary, which is symbolised by a skull. An angel is holding the crucifix tightly in its arms. Two thieves are on either side of the crucifix, together with an angel on the left holding the whipping column and lashes and another angel on the right carrying the spear and reed. There are two more angels above these: one holding the crown of thorns and another the nails and tunic of Christ.

The Prophet Isaiah and King David appear up to the waist in the recesses of the upper register, each holding a phylactery. The statue of David, to whom the Book of Psalms is attributed, bears the following inscription: “For thou dost not let thy godly one see the Pit” (Ps 16: 10). The statue of Isaiah has the following: “His sepulchre shall be glorious” (Is 11: 10). These are both prophecies of the resurrection. But the monument does not just evoke the death of Jesus: it is also filled with the hope of his resurrection.

The lower section is devoted to Christ's entombment. In addition to Christ, various figures mentioned in the Gospels are found here, all looking at Christ’s face. At Christ's head is Joseph of Arimathea, who owns the tomb. A man traditionally acknowledged to be Nicodemus is at his side. The Blessed Virgin, supported by St John, is in the centre. Two other female saints are on her left: Mary, the mother of James, and Salome. A figure dressed as a knight is standing opposite Joseph of Arimathea. He probably represents the donor who made this work of art possible. Lastly, Mary Magdalene is at the foot of the tomb, sitting in prayer. She is depicted in penitents’ clothing. Her serene face, which together with Christ's is the only one not frowning, expresses her faith and prayer. Mary, who is described by Jesus as having “chosen the better part” (Lk 10: 42), is the model of the contemplative life. On either side, two Roman soldiers are guarding the tomb. Their hands were broken and faces smashed by overly zealous pilgrims.

To the left of this monument is a Burgundian pietà under an altar. We have proof of its presence as early as 1477. 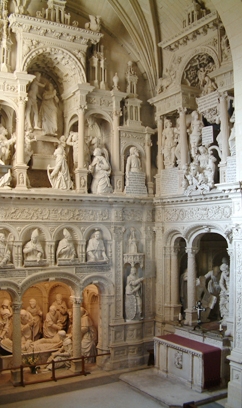 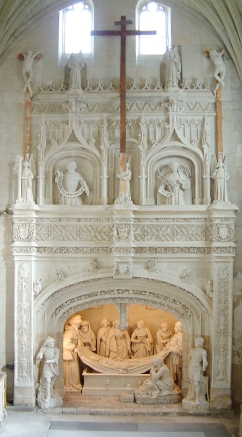