Gregorian chant is not primarily a subject of scientific and historical study. Although this research is important and necessary, turning the chant into a memorial to the past would destroy the Church’s living Tradition. By its very nature, Gregorian chant is at the heart of the liturgy, the public prayer of the whole people of God. The Gregorian repertoire is therefore contained in the Church's current liturgical books. These books are the Gradual, containing the Mass chants, and the Antiphonal, containing the entire divine office.

The Gradual, the book containing Gregorian chants sung during the Mass, has three main sections: the Proper, the Common and the Ordinary.

The Proper contains chants for each Sunday of the liturgical year (Advent, Lent, Easter time, Ordinary time, etc.) feasts of the Lord and of the Saints. These chants are as follows: the introit, gradual, alleluia, offertory chant and communion chant. It also contains tracts – sung after the readings in Lent – and sequences (Victimæ paschali laudes, Veni Sancte Spiritus, Lauda Sion, Stabat Mater).

The Common assembles all the chants sung on saints’ days that do not have their own proper chants.

Alongside the Proper and Common chants, the Mass includes chants with set texts, which are independent of the day and feast. These chants are called the Ordinary: the Kyrie, Gloria, Credo, Sanctus and Agnus Dei.

Seven times a day and once during the night, the community comes together in choir to sing the Divine Office (Opus Dei, Work of God), the great daily prayer of the Church. This essential task holds a central place in and is the primary duty of all religious life. The day and night offices are “the splendid accompaniment, the preparation for and radiance from” the Mass, to quote the words of Dom Delatte in his Commentary on the Holy Rule.

The Divine Office contained in the Antiphonal sanctifies the whole day with divine praise. The melodies of the various parts of the Office (antiphons, psalmody, responsories, hymns and verses, the Gospel canticles of the Benedictus and Magnificat) vary in their ornateness. Each office also includes biblical readings, whose sober recitative forms the basis of all Gregorian chant. The Antiphonal is divided into the Proper (of seasons and saints) and Commons of Saints. 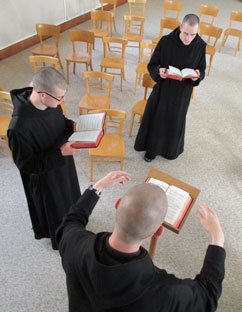 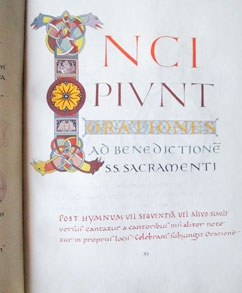