Our abbey church was partially rebuilt in the 15th century and structurally extended in the 19th century. The oldest part goes back to the 11th century. The long, narrow church comprises two sections, which follow on from one another: the nave for the faithful, which corresponds to the old church dating mainly from the 11th and 15th centuries, and the monks' choir built by Dom Guéranger in 1865.

The stained-glass window that once illuminated the back of the nave had to be blocked up to install the great organ. Several bays therefore now lie in darkness. But this helps create a harmonious progression towards the light, which floods into the choir in the morning. The church originally had two side aisles, which were destroyed during the Hundred Years' War. The openings were walled up, before being reopened by Dom Guéranger to install the side chapels in the second half of the 19th century. The left side chapels overlook the cloister and are hence blind.

A statue of St Peter – the monastery's patron – stands on the right of the nave. He is wearing pontifical vestments and the papal tiara. In accordance with iconographic tradition, he is holding two enormous keys in his hands. The statue was made at the end of the 15th century and was erected here by Dom Guéranger when the dogma of papal infallibility was defined in 1870. The inscription engraved in Greek, Latin and French on the statue's plinth was once beneath the famous statue of St Peter in Rome: “Contemplate the God who is Word, the rock divinely hewn in gold. Founded on it, I am unshakable.” 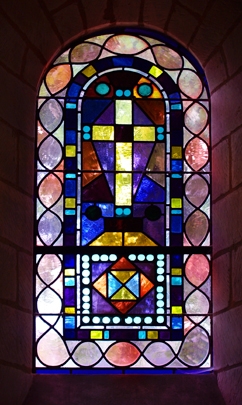