The musical palaeography workshop first originated in Dom Guéranger's desire to restore the full beauty of the Church's liturgical chant. To this end, Dom Guéranger asked Dom Paul Jausions and then Dom Joseph Pothier to rediscover its origins by studying mediaeval Gregorian chant manuscripts. The first transcribed manuscript acquired by Solesmes was produced in 1862 by Dom Jausions in Angers library. Spurred by their growing knowledge of ancient manuscripts, the monks began to publish chant books containing melodies they had restored from these manuscripts. The first Gradual assembling the Mass chants was published in 1883.

In 1889, Dom André Mocquereau gave this research a new dimension. He decided to publish the facsimiles of ancient manuscripts that the monks had used to restore the Gregorian melodies. This resulted in a published collection called Paléographie Musicale and marked the official launch of the musical palaeography workshop. Dom Mocquereau wanted to prove to the scientific community that Solesmes’ restorations were faithful to ancient tradition. We have amply achieved this objective.

To carry through Dom Guéranger's inspiration, monks of Solesmes were sent to libraries throughout Europe to photograph ancient chant manuscripts. In this way, they built up a collection of over six hundred manuscript facsimiles, some of whose originals have now disappeared. These facsimiles, together with various tables and indexes facilitating their use, constitute the sources for the workshop’s research.

At the same time, work has continued to publish musical palaeography volumes. Twenty-five volumes have been published, the latest of which came out in 2014. It was edited by Katarina Livljanic and is a facsimile of manuscript 542 from the Abbey of Monte Cassino's library. The workshop also publishes an annual scientific journal called Études Grégoriennes. 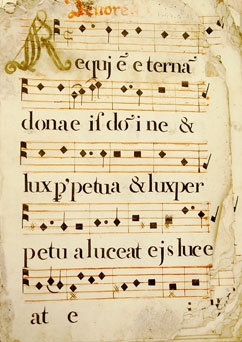